How to Prove Fault in a Car Accident Claim

A car accident can be a life-altering event. If you suffered injuries, you might wonder what you should do next. Proving someone else was at fault can be a challenge, especially if you’re forced to spend your time treating your injury.

You must take immediate action if you want to pursue compensation from the at-fault party responsible for causing the car crash. That means hiring a car accident lawyer, gathering evidence, and filing a claim promptly.

Below are tips for proving fault after a car accident so you can hold the negligent driver liable for your injuries. Fusco, Brandenstein & Rada, P.C. is here to help you successfully resolve your case. Contact us today!

You will need sufficient evidence to prove someone else caused the accident. The police report could be a valuable piece of evidence in your claim.

An investigating officer might have shown up at the scene of the crash if someone had called 911 to report what happened. The officer should have written a report with details regarding the accident, such as:

The information the police report contains could show that another driver or party is at fault. Although the officer’s determination of fault isn’t always factual, it could help your claim if their investigation shows someone other than you caused the crash. 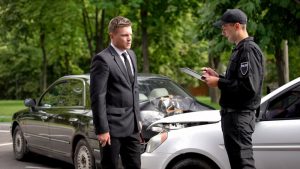 Take Photos at the Accident Scene

If your injury isn’t too serious, you could take pictures at the scene of the accident. Photographic evidence is often indisputable proof of what happened. Take photos of the entire area, including skid marks, damage to the vehicles, and debris in the road.

You can also take a video of the scene itself. In other words, if the other driver ran a stop sign and crashed into the side of your car, take a video showing how each vehicle ended up after the collision.

Pictures of your visible injuries can also benefit your case. You need to prove not only that someone else is at fault but also what injuries you suffered in the crash. Take photos if you have a broken bone, lacerations, or blood on your clothing.

Traffic cameras are everywhere. You could secure footage from a nearby traffic camera. If it captured the accident, it could show the at-fault driver’s negligent actions prior to the crash. They might have made an illegal U-turn or blown through a red light.

You can also obtain footage from security cameras on office buildings or residential buildings. A video showing the events leading up to an accident can be substantial proof that you didn’t do anything to cause what happened.

One or multiple people could have seen the crash or the moments right before. Speak to anyone at the scene who saw what took place. You could obtain information from more than one person to string together the details that prove another driver is at fault.

For example, maybe one person heard the impact of the collision but didn’t see what happened beforehand. Another person might have noticed a driver swerving on the road but walked into a store before the crash occurred.

Write down the names and phone numbers of everyone near the scene. If they saw anything that could prove your claim, they should provide witness statements. They could even testify at trial if you need to file a lawsuit and take your case to court.

You must have evidence of an injury to pursue compensation after a car accident. Proving fault means more than just submitting proof of someone else’s negligence. You also have to prove your injury directly resulted from the crash.

You should go to a hospital after you leave the accident scene. Your doctor can include information regarding the crash in your medical records. Request copies of those records to use during your case.

If you have pressing questions about your case, don’t hesitate to contact us today.

Handling a car accident claim can be complicated and confusing. You need an experienced lawyer by your side to guide you through the process.

It’s critical to hire a lawyer immediately after the accident. They can represent you in your case and gather the available evidence to prove what happened right away before that evidence can be destroyed or lost. 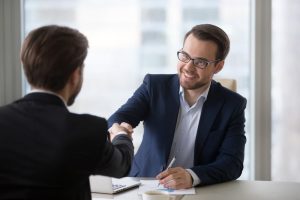 If you were injured in a car accident someone else caused, do not hesitate to contact the New York car accident lawyers of Fusco, Brandenstein & Rada, P.C.. We can launch a thorough investigation and review the circumstances to determine who was at fault.

Our legal team has over 40 years of experience holding negligent drivers accountable for their actions. We will fight to recover the maximum compensation you deserve.

Call us today for your free consultation at 516-496-0400, or reach out to us online. We have the experience your case needs.